This 1936 Olympics Cigarette Lighter is a wonderful piece of history.  Condition is great considering its age.  Featured on one side are the Olympic rings and Nazi Party Eagle.

The 1936 Olympics were held in a tense, politically charged atmosphere.  The Nazi Party had risen to power in 1933, two years after Berlin was awarded the Games, and its racist policies led to international debate about a boycott of the Games.  Fearing a mass boycott, the International Olympic Committee pressured the German government and received assurances that qualified Jewish athletes would be part of the German team and that the Games would not be used to promote Nazi ideology.  Adolf Hitler’s government, however, routinely failed to deliver on such promises.  Only one athlete of Jewish descent was a member of the German team; pamphlets and speeches about the natural superiority of the Aryan race were commonplace; and the Reich Sports Field, a newly constructed sports complex that covered 325 acres and included four stadiums, was draped in Nazi banners and symbols.  Nonetheless, the attraction of a spirited sports competition was too great, and in the end 49 countries chose to attend the Olympic Games in Berlin. 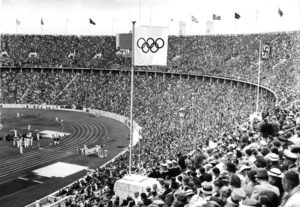