On our site, you will have the opportunity to view some of the rarest personal silverware and flatware owned by the most important Third Reich personalities such as Adolf Hitler and Hermann Goring.  Our pieces are museum quality artifacts.  You will also find Hitler’s and Goring’s silverware used on their personal rail-cars (Deutsche Reichsbahn). The Reichsbahn silverware is stamped with the rail-car number 242, 243, 244 etc. which designates who’s railcar the pieces were used.
The majority of the pieces found here have unmistakable provenance, mainly Hitler’s formal silver service. The flatware pieces were made by the Bruckmann & Söhne company and given to Hitler for his 50th birthday in 1939. It is known that the silverware and flatware were distributed among the places Hitler frequented the most: the Berghof (Hitler’s Mountain home); der Kehlstein (the Eagle’s Nest); the Gasthaus (Guest House) at Obersalzberg; the Braune Haus (The Brown House); the Prinzregentenplatz apartment in Munchen; and the Reichskanzlei in Berlin. 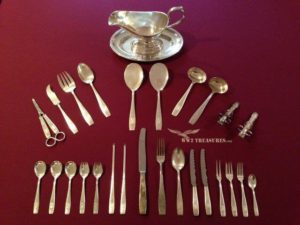