Here’s another impressive find.  This Hitler tablecloth was liberated from the ruins of the Berchtesgaden Tea House (Teehaus) by a US Veteran in 1945.   The cloth has a lace border with roundels enclosing swastikas and measures 52″ x 52″.  This is 1 of only 3 that exist.  Keep in mind that this was retrieved from the ruins, so the cloth has several defects (see images).  The veteran was in the 82nd Airbourne Division.  This comes with a certificate of sale stating provenance from the gentleman who purchased the table cloth in 1989. 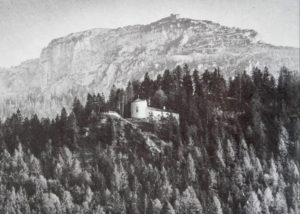 Wikipedia – In 1937, a Teehaus with a round main room was built in a wooded area on Mooslahnerkopf hill (Braun spelled it Moslanderkopf in photo albums), across the small Obersalzberg valley from the Berghof. Hitler took an almost daily afternoon walk there when he was at Berchtesgaden. The stroll along the mostly wooded path between the Berghof and the teahouse was less than a kilometre and at one spot featured a scenic overlook of the whole valley, fitted with wooden railings and a bench, where many widely known photographs were taken and political discussions were held (in 2004 this site was somewhat restored to its early 1940s era appearance for a German television mini-series). At the teahouse Hitler might even nap in an easy chair, surrounded by friends and associates from his inner circle.  Most of the few surviving photographs of Hitler wearing eyeglasses were taken in the teahouse. Some sources have now and then mistakenly captioned photographs snapped in the Mooslahnerkopf Teehaus as having been shot in the spectacular Kehlsteinhaus far above the Berghof, where Hitler seldom went.